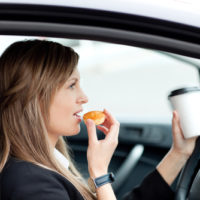 While out on New Jersey roads we’ve all seen drivers trying to get a bit too much done at once while behind the wheel. Perhaps you’ve seen drivers applying makeup, eating an elaborate meal, or even reading the newspaper while driving, and wondered if such practices could possibly be safe. If a new bill passes the New Jersey state legislature, such habits will subject multi-tasking drivers to a steep fine.

The bill, sponsored by Assemblymen John Wisniewski of Middlesex and Nicholas Chiaravalloti of Hudson, would make it illegal to eat, drink, groom themselves, read, or use any electronic devices while on the road. “The issue is that we need to try, in every way, to discourage distracted driving,” said Wisniewski. “It’s dangerous. Education and enforcement can change the attitudes of people.” Violations of the law would impose fines of between $200 and $400 for an initial offense, and between $400 and $600 for a second violation. For a third offense, drivers could face fines of up to $800, motor vehicle points on their license, and a 90-day license suspension.

Distracted driving is cited as one of the leading causes of fatal crashes in New Jersey, and an issue that requires drastic measures to correct. However, some say that the new law would go too far. Steve Carrellas, the policy and government affairs director for the National Motorists Association chapter of New Jersey, stated, “This proposed distracted driving law is not needed, since three statutes can be used when a distraction causes unsafe actions, like swerving or crossing a line. There is unsafe driving, careless driving, and reckless driving.” Carrellas added that some multitasking by drivers is an inevitability, and that the law was ambiguous on the subject of how much non-driving behavior would be tolerated. “Would [the bill] make changing the radio station or adjusting the volume illegal? What about talking to a passenger?” The Essex County Community Traffic Safety program coordinator, Arnold Anderson, explained that public officials needed to address the “the mindset of multitasking.” “You can’t multitask,” Anderson stated. “We are so far away from the mindset of … just drive.”

If you or someone you love has been injured by a distracted driver in New Jersey, get help seeking the compensation you may be owed for your medical bills, lost work, and pain and suffering by contacting the dedicated and knowledgeable personal injury attorneys at Massood Law Group for a consultation on your case, at 973-696-1900.