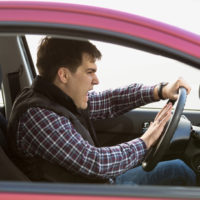 Aggressive driving isn’t just impolite; it can be downright dangerous. A recent study by the AAA Foundation on Traffic Safety found the behavior troublingly prevalent, and linked to other dangerous driving habits likely to result in serious car accidents.

The AAA Foundation conducted a survey of over 2,700 licensed American drivers who had been behind the wheel in the last month. The survey included questions about the driver’s history of citations or illegal driving habits, as well as questions about whether they had committed any behaviors widely deemed “aggressive.” These included making rude gestures at other drivers (i.e., giving them the finger), yelling at other drivers, following another car at a close distance to get them to speed up or move (i.e., tailgating) cutting off a driver on purpose, getting out of their car to confront another driver, or hitting or ramming another driver’s car on purpose. The study found that nearly 80% of drivers had committed at least one of these behaviors in the past year. Tailgating was found to be the most common, with yelling and honking at drivers in anger close behind. Surprisingly, 3% of drivers admitted to bumping or ramming another car deliberately. While 3% does not sound like a large number, this would mean that 5.7 million US drivers had hit another car on purpose, if extrapolated to the entire population of licensed drivers.

Previous research had already established the link between aggression behind the wheel and serious accidents. The AAA Foundation conducted a study looking at fatal accidents occurring between 2003 and 2007, along with witness descriptions of the events surrounding those accidents. In nearly 56% of these accidents, at least one act of aggressive driving was exhibited prior to the crash. The researchers suggest that greater diligence by police enforcing laws barring following too closely or passing with insufficient distance between cars could serve to reduce the negative effects of aggressive driving on roadway safety.

If you have suffered injury in an accident with a negligent or reckless driver in New Jersey, get help seeking the money damages you may be owed for your injuries by contacting the skilled and compassionate Wayne personal injury lawyers at Massood Law Group for a free consultation on your case, at 973-696-1900.